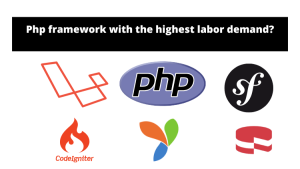 The demand in remote portals

When starting to learn a framework it is necessary to evaluate its learning curve, the codeigniter framework is the ideal option to learn programming with php starting with version 3 and then continuing with version 4, then learning a framework like laravel which It is the leader in labor demand today, but to fully learn there are some things that should be known about other frameworks such as symfony or cakephp where we learn to deepen how to manage interfaces, investigate a little more in dependency injection with which You will have greater fluency and understanding of behind-the-scenes functionality when developing with Laravel.

The demand for learning

Conclusions: Each php framework fulfills the task in terms of performance and perform most basic operations such as CRUD, REST API, etc., but in terms of labor demand, the laravel framework is currently the leader

By analyzing these statistics we can conclude that the countries with the greatest hunger for knowledge in php and frameworks are countries with a greater number of inhabitants such as India, Indonesia, Malasia.